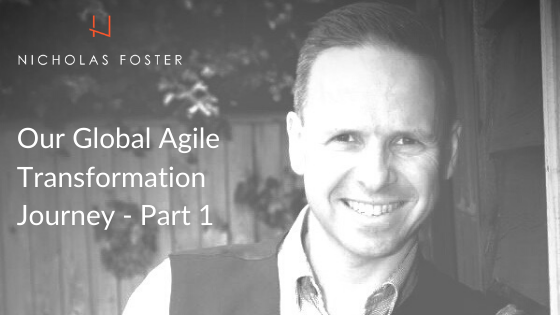 In 2013, I put my reputation and senior leadership career on the line by initiating a change program. A program that would change how a global team of 150 would deliver a $20m portfolio of projects. Projects with mandatory regulatory and market-driven deadlines.

Was I crazy? Let’s find out!

During this and the following series of posts, I will share the challenging journey we went through together: warts and all.

I joined the team in 2003 as a senior software developer working in a team of about 20 people in London.

Over the next ten years, the team’s responsibility, size and locations expanded.

At one point in 2009, the team was over 300 people in London, New York, Raleigh Durham and Singapore.

With the team’s growth, my role and responsibilities also grew and in 2009, I was asked to succeed my favourite boss and mentor Mike.

What Sparked a Change

The global team had a reputation for delivering on its commitments and worked long hours and weekends to ensure targets were met.

As I was reviewing the portfolio of projects to deliver this year, I reflected on what we had achieved in 2012.

It was a tough year for the team –

If I wanted to deliver this huge portfolio of projects this year, reduce the noise and inject some enjoyment back into the team, I had to make a radical change.

Find out more in part two.

If you don’t want to miss future instalments, please sign up to have it delivered straight to your inbox => https://nicholas-foster.com/career-success-insights/