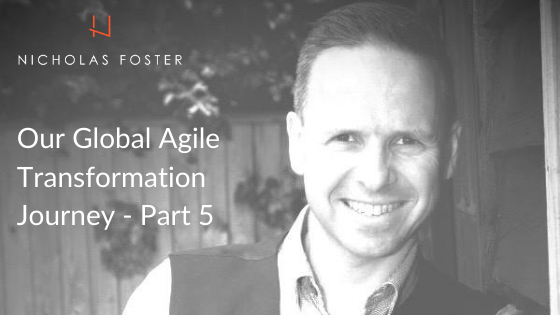 In Part 4, I talked about how I communicated my global agile transformation vision to the London team. This week, I was going to speak to you about the difficult conversations I had with the business, but I forgot about the additional information I needed to do this.

So, this week I am going to share with you how we –

Although I’m struggling to recall all the facts from 2013, I am enjoying reliving the journey. I hope you are too.

The leadership team and agile coaches sat down together to define the agile release train.

Although we’d done agile training, we hadn’t done SAFe training, so the agile coaches were cleverly moving our process knowledge forward in increments, so not to overloaded us.

They explained that in simple terms, an agile release train aligns a set of cross-functional teams to deliver defined increment value known as program increments (PI) to our business clients.

A PI is broken down into a number of two weekly system increments where at the end of each increment, the software has been defined, developed, tested and demoed to the business users who sign off it meets their requirements. It can if possible, be deployed.

The system increments are a number of development sprints usually followed by a planning and innovation sprint.

At this stage, we just needed to decide on the cadence of the PI. We can work the rest out later.

I outlined that we didn’t have a standard release cycle due to the demands of our stakeholders.

Our two main stakeholder groups were –

This creates full transparency as well as lowering the cost by enabling these events to be planned in advance.

The teams also start to work to a standard rhythm and automatically know what they should be doing and by when. The coaches stated that the process eventually becomes a synchronised heartbeat across all the teams.

Taking into account our agile objectives as well as our stakeholder requirements, we decided that we would release to production every six weeks. If our stakeholders UAT and release dates did not align to these cycles, we would plan to release our changes to production earlier than they needed. To ensure the functionality was not used until tested/signed off, we would use two configuration switches. One switch to turn the functionality on in a UAT environment and another for production.

This was something I needed to discuss later with the stakeholders to ensure their expectations were managed and that we got their requirements in time.

We then looked at how the six weeks would be broken down into two-week system increments.

I outlined our current develop/test/release/deploy process –

The coaches stated that at the end of every system increment, the functional changes should be tested by the agile teams (automated and not done by QA), signed off by the business users and ready to deploy.

The coaches asked how long merging, regression and deployment usually took. I stated that it took about two weeks.

The coaches proposed that one of the system increments should become a hardening sprint where the agile teams would help QA get the team ready for release.

I asked what the agile teams would be doing during these two weeks as it seemed as waste as they could be developing functional changes for the next release. The coaches stated that the teams would be –

We should also eliminate the wasteful and risky activity of merging. All the teams should merge their changes to the release branch every ten minutes or less. I’m not sure if they saw the horror in our faces, but the coaches quickly jumped in and said – “we can discuss this later on down the road.”

I liked the goal of eliminating the hardening sprint by focussing the development teams on it. We had tried before to automate the regression with the QA team, but other demands on them took precedence.

Every release, we were continually paying a high amount of interest due to our increasing technical debt and lack of automated testing. It was time to start reducing the notional.

I was in, and so was the leadership team.

A program increment would be six weeks. – Two development sprints and a hardening sprint.

The project managers pretty much worked this way with the regional team leads anyway, so wasn’t a big change. We had enough of those going on.

The coaches worked with the product owners to define the business context for the PI as well as creating the EPICs & user stories.

We were not ready to start planning — time to start organising the teams.

The coaches took the teams off to a big meeting room to self-organise. The leadership team were not allowed to attend to avoid what they called – “influencing.” I did, however, ask afterwards how the coaches facilitated the exercise and how it went.

The coaches said that each person was given a badge displaying the skill ratings that they had given us from the survey.

On three of the walls was an A4 sheet stating the acceptance criteria for each team.

The teams were asked to organise themselves under each sheet of paper, ensuring they met the acceptance criteria.

The coaches then assessed the teams against the acceptance criteria and asked them to reorganise if they didn’t meet it.

It took a few iterations, but the teams got the sign-off. Apparently, it was fewer iterations than they were used to.

The coaches outlined the role of a scrum master, and the teams were asked to select a team member as their scrum master. Andy, Ian and Ainsley were chosen.

The teams were then asked to give their team a name – Zoo, Bolt & Everest were now ready to form, storm, norm & perform.

The rest of the day was spent with the teams moving their equipment so they could sit together as well and setting up their scrum boards on the wall. Site management wasn’t happy with me as they had to update the desk plans and re-patch the phones.

In Part 6, I am going to share with you how the teams turned painful day-long planning sessions into just a few hours, what they learnt and how they adapted.

Please note that some of the SAFe terminology and approaches used were part of version 2/3 of the framework and have been updated/removed from the latest version – 5.