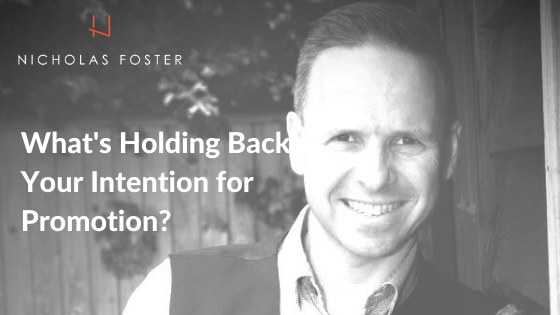 Intention is one with cause and effect. Intention determines outcome. And if you’re stuck and not moving forward, you have to check the thought and the action that created that circumstance.

Are you holding back your intention of promotion?

Is there an internal opposing force getting in the way? An inner force so powerful that it paralyses you from doing the work needed.

Let me share with you a story about Jake. Jake is a high achieving leader who works hard and gets results. He has everything needed to get to the executive level, and he is hungry for it. But something is holding back this ambitious intention.

Before we get to that, let me tell you a bit more about Jake.

Jake is a family man. He has a caring wife and two young children who are the apple of his eye.

Management views him as a top performer and consistently rates him within the top 10%. As expected, he is renumerated very well.

Because of this, he and his family have an extremely comfortable lifestyle. He has a lovely home, goes on a few nice holidays a year, and his family never go without.

But Jake wants more from his career but never has a conversation with his boss or is focused on the work needed. Instead, he stays quiet and focuses on the next target and associated challenges. He stays in the weeds where it feels safe.

But what is holding back Jake’s intention and why doesn’t he feel safe to step out of the weeds? Let’s dig a bit deeper.

The company Jake works for is going through a challenging time, and executives are being let go. Executive promotion opportunities are still available, but the competition is intense due to limiting numbers.

Even though Jake knows he can fight off the competition, Jake believes if he gets promoted, then at some point, he will be let go.

The risk is too high for Jake to impact one of his core values – security. Security not for himself but security for his young family. He wanted to ensure they felt as secure as he did whilst growing up.

Jake’s thinking is impacting his ambitions, and at some point down the line, it will affect his emotions and maybe his relationships with his loved ones.

Jake’s thinking is limited to the environment he is working within. When his thinking was challenged on this, he realised that if he gets promoted, opportunities will open up for him at companies that are scaling.

Although he wants to stay at his current company, he now realises that the risk to the security of his family is reduced and manageable.

Jake is now comfortably disproving his limiting belief by actively working hard to position himself as the leader of choice for the executive level. His boss also knows his intention and is actively helping him.

He is constantly expanding his relationships and knowledge outside the company so he can utilise these if need be.

He is now actively managing his risks rather than living with them.

Now, what’s holding back your intention?

How to Ace the Executive Leader Promotion Process

Get Promoted and Kiss Your Career Goodbye