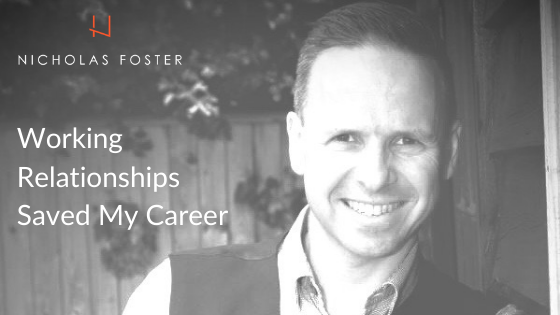 I guarantee at some point in the future that a working relationship will save your career and leadership reputation.

There will be a career-limiting issue you cannot solve without the help of others. The help which requires colleagues to go out of their way. If you haven’t built up a strong working relationship with these colleagues, it could be game over.

Let me share with you a story of how a working relationship saved my career.

“Technology does not run an enterprise. Relationships do.”

I was leading a programme to build and rollout out a new strategic trading application. We had now reached an exciting stage. It was ready to be demoed. As I demoed it to the traders, it exposed a show-stopping issue. The application seemed to slow down the trader’s desktop.

What was going on and what was I going to do?

I called a colleague of mine Nicky who headed up the trading floor infrastructure team.

I met and worked with Nicky when I started at the company and we had stayed in touch as our careers took different paths.

I explained the issue to her and she said she would be happy to help if she could.

She asked one of her team to analyse the resource utilisation levels on all the trader computers we were targeting for our rollout. The results showed that the computers were already heavily utilised, and our new application was effectively the straw that broke the camel’s back.

Dead In the Water

I thought we were dead in the water. The programme did not have the budget to upgrade the trader’s computers. A lesson to learn for future programmes, but what about this one. There were some very senior stakeholders with an interest in the success of this programme.

There was a sinking feeling in the pit of my stomach. It would take months to solve this. I had to find the budget, procure the computers, get the internal and vendor software installed, test them and schedule a rollout.

What was I going to tell the team who worked long hours and weekends to meet the deadline?

What was I going to tell my boss?

And what was I going to tell the stakeholders?

I’m never sure it’s the telling people that is so hard. I think it’s more the reaction you expect.

Anyway, unbeknown to me in the background, Nicky was working some magic. This magic that would keep both the programme and my career moving forward.

The computers on the trading floor were all scheduled for a significant upgrade and Nicky, and her team were responsible for rolling them out. One business area at a time.

Some machines had been delivered and were being prepared for rollout to another business area in two weeks.

Nicky called me with this news and told me that if I wanted, she could change the rollout schedule to rollout these computers to the traders I was targeting instead of the other business area.

Well, I said “yes” immediately. I couldn’t believe there was a solution. Nicky had saved the programme and maybe even my career.

“Thank you for helping me out with this,” I said gratefully. She casually replied, “no problem, happy to help.”

I imagine it was a lot of hassle for Nicky and her team to deal with a last-minute reschedule. Maybe some difficult discussions with her stakeholders and clients.

Our programme deadline moved by two weeks with some dissatisfaction and a little noise. But when I explained that it could have taken months at the worst case and that Nicky and her team had gone to the extra mile to help us bring this down to two weeks, the noise died down.

On Monday morning after the computer upgrades, I visited the trading floor to see what the traders thought of them. The head of the desk said that he was in at the weekend making sure his computer was ready for Monday morning and said they were great for games.

I thought to myself, all the effort involved and all you want to do is play is games. He was watching this go through my head and then laughed as he saw my reaction.

The following week we rolled out the application to the London desk. We then tackled Hong Kong and New York. But guess what, we checked the machine specs first.

You could say that is Nicky’s job to help. But I believe she went the extra mile and changed all her plans because of our working relationship and how important this programme was to me.

I could have made it happen by escalating up the senior leadership path. But I know that this leaves a bad taste with everyone involved. It also doesn’t do your reputation as a leader any good.

Escalations do have a place but should be an exception.

I believe professional working relationships are the key that keeps change moving through an organisation.

What do you believe?